The TikTok stars, who dressed as Harley Quinn and Joker for this year’s Halloween, are seen locking lips in a new photo that Addison posts on her Instagram account, much to fans’ delight.

AceShowbiz –
Addison Rae and Bryce Hall might have given their romantic relationship another shot. Two months after they called it quits, the TikTok stars sparked reunion rumors by posting new PDA-filled pictures on their individual social media accounts.

On Monday, November 2, the 20-year-old social media personality turned to Instagram and posted several photos of her and Bryce getting cozy in their Halloween costumes. Alongside the snaps that saw her dressing up as Harley Quinn and her ex-boyfriend as Joker, she simply penned, “crazier.”

Addison was not the only one making use of the photo-sharing site to flaunt their togetherness during the spookiest night of the year celebration. Her rumored on-again beau also let out two pictures of them in his own account “J + H,” he wrote in the accompaniment of his uploaded photos.

Bryce’s post has since been flooded with questions from fans and followers who were curious about their relationship status. A fan asked, “omg braddison is back??” Another individual sent out a similar inquiry, “Is bradisson back?” A third wondered, “R u guys back together?!”

Adding more fuel to their reconciliation rumors, Addison and Bryce were caught on camera making out during their Halloween celebration. In a video obtained by Hollywood Fix, the twosome were seen locking lips in the back alley behind a saddle ranch.

Addison and Bryce were first reported to be dating in late 2019, but they were soon be said to be involved in an on-and-off romance. The two finally confirmed their single status in August. “single and ready to jingle, anyways Christmas is literally in 4 months wtf,” the “He’s All That” actress tweeted at that time. Her 21-year-old ex, meanwhile, tweeted a few days later, “im single now stop asking me.” 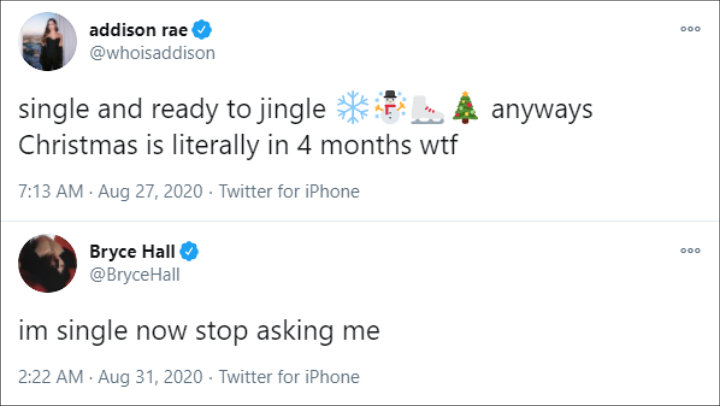 Addison Rae and Bryce Hall confirmed they were both single.

A month later, Addison spoke about the break-up in an interview with ET. “There were a lot of times we were on, we were off, and it was kind of just, like, a confusing situation, but right now, we’re just kind of both deciding that there are a lot of things going on in both of our lives that we really need to focus on and figure out,” she admitted.