The Captain America depicter takes a jab at the president for promising during his Florida rally that he will fire the head of the NIAID once he gets re-elected.

AceShowbiz –
Chris Evans has just given Donald Trump a new nickname as he continues to speak against the incumbent president. The actor has thrown a powerful jab at the businessman-turned-politician over his threat to fire Dr. Anthony Fauci should he get re-elected.

During his rally in Florida on Sunday night, November 1, the POTUS responded to supporters who began chanting “Fire Fauci” as he talked about the continuous media coverage of COVID-19. Smirking, he promised his supporters, “Don’t tell anybody, but let me wait until a little bit after the election. I appreciate the advice. He’s been wrong a lot.”

Not appreciating Trump’s disrespect to the immunologist, Evans tweeted on Monday, “This actual meatball wants to fire the U.S.’s top infectious disease expert during a pandemic. Fauci is a man of science.”

Asking others to voice their support for Dr. Fauci, he went on shading rapper Lil Wayne who recently met with the president. “Other folks from the scientific community need to stand up for Fauci before this dunce cap replaces him with Lil Wayne,” he added. 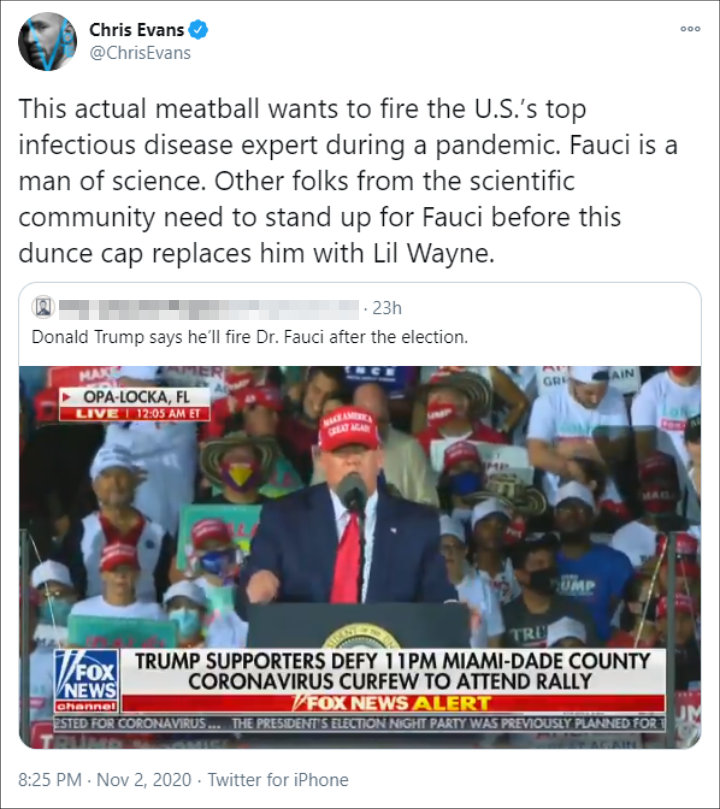 Evans isn’t the only one slamming Trump for his remarks about Dr. Fauci at the rally. “DISGUSTING-Trump fuels his MAGA rally to chant ‘Fire Fauci!’ …to which Trump replies-‘Let me wait until a little after the election’. What sick grotesque country do we live under? #COVID19,” tweeted epidemiologist Eric Feigl-Ding, who noted that Trump actually doesn’t have the power to do that.

The health economist added, “But here is the thing-Trump actually can’t directly fire Dr Fauci, who is head of NIAID, which is a division of NIH. Only NIH Director Francis Collins is likely the only one who can fire Fauci-but they are decades old best friends. And Collins says he would not!”

Not everyone, however, agreed with Evans. One Twitter user slammed the “Avengers: Endgame” actor for mocking Trump. “Chris you are a highly respected person and I love your movies. But calling the President ‘a meatball’ is totally disrespectful. He is the president and deserves respect whether you like him or not,” the said person reminded the actor. “Do you remember the Dixie Chicks… it could happen to you.”

Another argued, “I don’t think you can speak for the people from your multiple million dollar mansion where you have everything you need. Fauci will promote lockdowns if Biden wins.I know you won’t feel it, but a lot of us will. Celebrities should stop talking.”