A supporter of Donald Trump, the former ‘Hercules: The Legendary Journeys’ star wonders how Joe Biden comes to lead the presidential race when he ‘couldn’t fill a high school auditorium.’

AceShowbiz –
Kevin Sorbo is one of those Donald Trump supporters who couldn’t take the incumbent president’s potential defeat in stride. As Joe Biden is currently leading the White House race based on preliminary voting tallies, the actor questioned how the Democratic presidential candidate got the votes when he barely gathered a mass for his rally.

On Wednesday, November 4, while the votes were still being counted, the former Hercules depicter on “Hercules: The Legendary Journeys” seemed to allude that the votes for Biden were questionable. “I never see people driving around with Biden flags, someone want to explain how this guy who couldn’t fill a high school auditorium is leading currently?” he tweeted.

But Biden supporters, like Chrissy Teigen and Alyssa Milano, have known better that the former Vice President has always put safety first during his presidential campaign amid the COVID-19 pandemic. Responding to Kevin’s tweet, Chrissy clapped back, “because we know how stupid it f**kin looks lmao.”

Alyssa schooled the 62-year-old on the importance of social distancing, “Our flag flying is our vote. And our compassionate candidate encouraged people to protect themselves from the pandemic that has taken 250k American lives. This is not hard.” 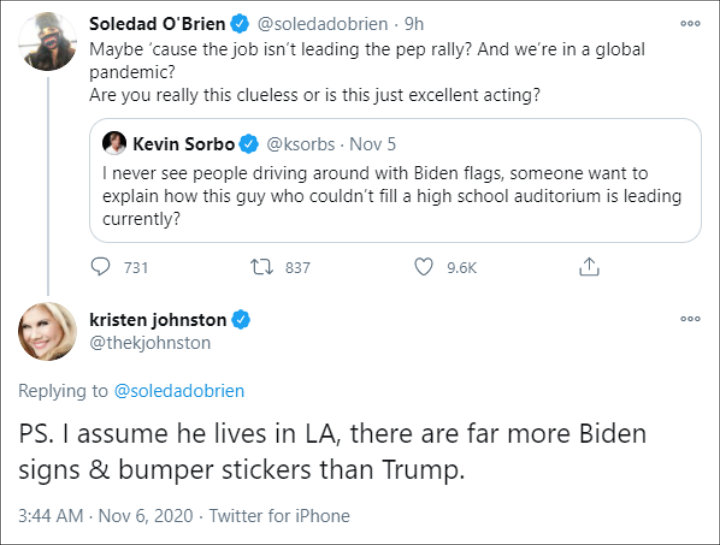 News anchor Soleded O’Brien clowned Kevin for his question, “Maybe ’cause the job isn’t leading the pep rally? And we’re in a global pandemic? Are you really this clueless or is this just excellent acting?” Kristen Johnson then chimed in as she commented on Soledad’s tweet, “PS. I assume he lives in LA, there are far more Biden signs & bumper stickers than Trump.” 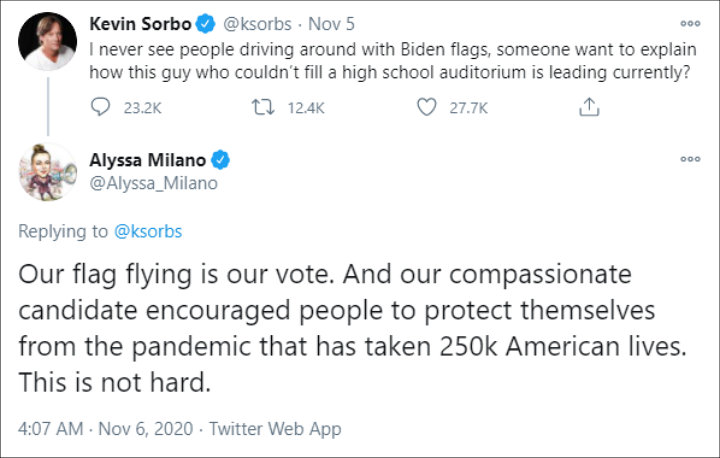 Trump himself has falsely declared a “big win” and claimed that he was cheated of victory. On Thursday evening, November 5, he said at the White House briefing room, “If you count the legal votes I easily win.” He added, “If you count the illegal votes they are trying to steal the election from us.”