Mark Ruffalo, the actor playing the character the Marvel Cinematic Universe, responds to the supermodel’s picture by writing, ‘Happy 1st Halloween to a fellow Strongest Avenger You look smashing!’

AceShowbiz –
New mom Gigi Hadid has made Halloween 2020 a family affair. Celebrating the creepiest night of the year, the supermodel transformed her newborn daughter into Incredible Hulk as she and her boyfriend Zayn Malik posed for their first family photo with their baby girl.

On Saturday, October 31, the 25-year-old took to Instagram Story to share a picture of herself being joined by her beau who cradled their one-month-old child in his arms. The snap displayed the infant, whose face was covered by a sticker, being dressed up in a knit green hat and a green shirt to replicate the fictional superhero.

Gigi herself channeled Samus Aran from Metroid video game by slipping into a skintight blue bodysuit and wearing her hair in a high ponytail. Her boyfriend Zayn, in the meantime, embraced his Slytherin side by dressing up as a “Harry Potter” character. Over the adorable shot, the new mom added a sticker that read, “My First Halloween.” 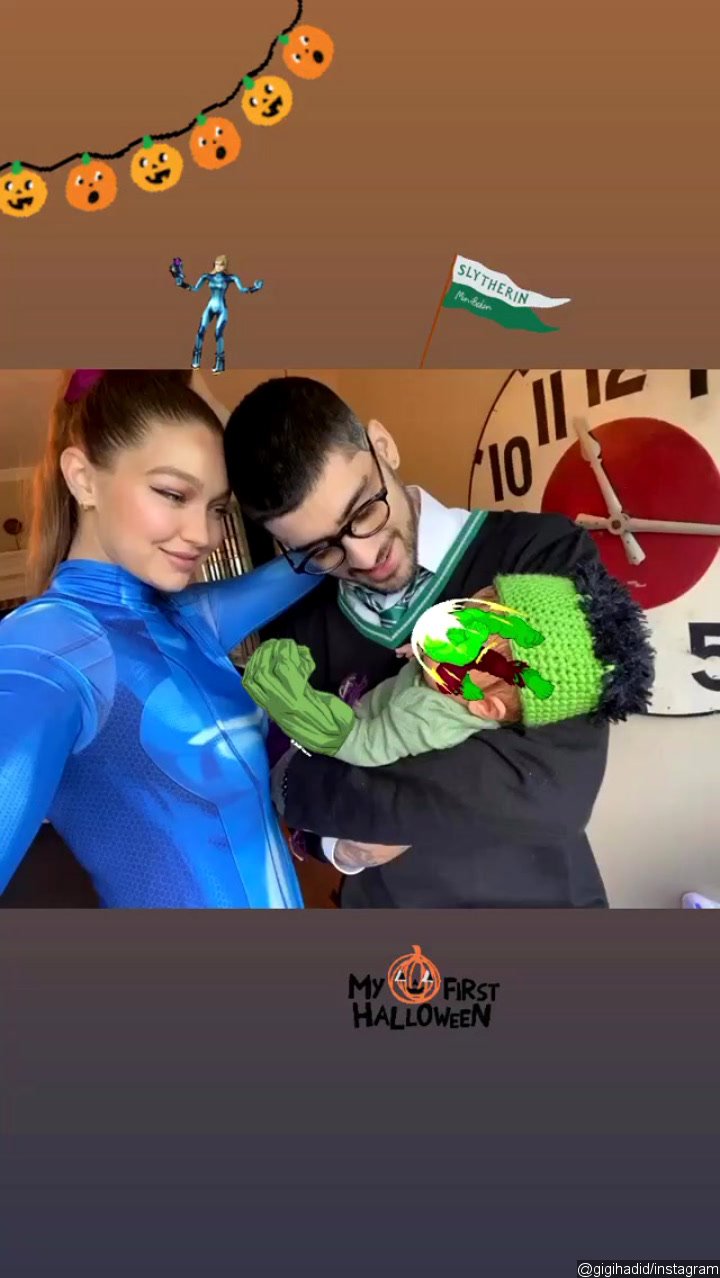 Gigi’s post has since been shared by PEOPLE on the publication’s Instagram account. It quickly caught the attention of Mark Ruffalo, the actor playing Hulk in the Marvel Cinematic Universe, who in response wrote in the comment section, “Happy 1st Halloween to a fellow Strongest Avenger You look smashing!”

Around the same time she let out the family portrait, Gigi turned to her Instagram feed to upload several images of her flaunting her toned post-baby body in her Halloween costume. “choose your player,” the daughter of Yolanda Hadid simply noted in the caption, and added a pumpkin emoji.

Many of Gigi’s fans were in disbelief over her post-baby body. One individual raved, “damn how can u have that body after giving birth omg.” Another wondered, “How can you be like that after a pregnancy?” A third exclaimed, “YALL SHE HAVE BIRTH LIKE A MONTH AGO AHHH AND SHE IS ROCKING IT I-.”

Gigi and Zayn have yet to reveal their baby’s name, but they welcomed the tot on September 23. Making public the happy news, she posted on Instagram a black-and-white picture of her boyfriend’s hand holding their daughter’s. “Our girl joined us earth-side this weekend and she’s already changed our world. So in love,” she penned alongside the post at the time.