Monday morning and more November low pressures are rattling our way off the Atlantic. Further spells of wind and rain with brighter lulls in-between. A dramatic change in the north by Thursday morning as temperatures plummet from possibly 17C on Tuesday to only 5C for NE Scotland. Those lows are forced further north later in the week with high pressure trying to build from the south. Midweek is briefly colder, but it looks like the end of the month will be colder than average, quite a departure from the mild November we’ve seen so far. 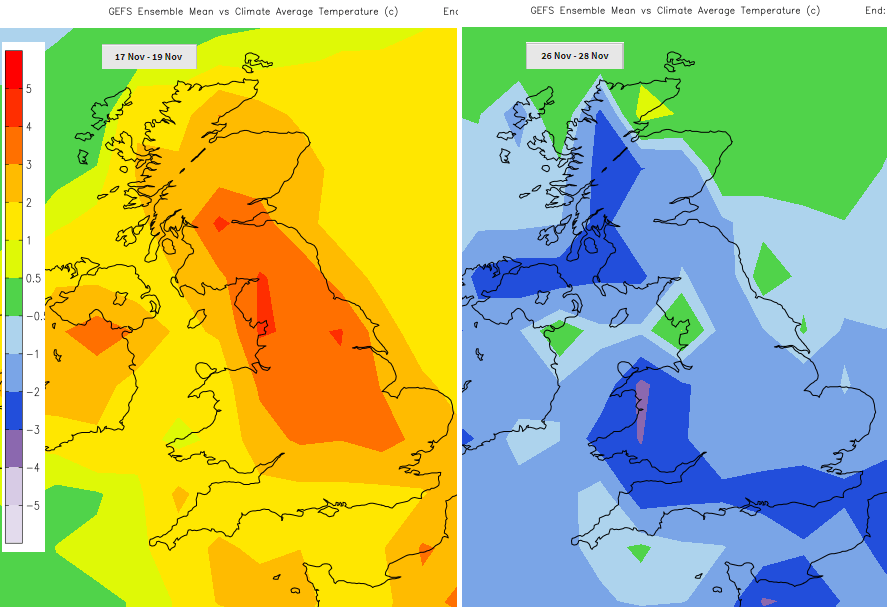 Lively, mobile conditions continue this morning as one low pressure heads away over the Norwegian Sea and another one heads in from the Atlantic, its centre moving between Iceland and NW Scotland tonight.

There are coastal/tidal flooding concerns today, the Thames Barrier is closing this morning as it does occasionally. The Environment Agencies highlight the Yorkshire coast, NW, NE and SE coasts, also Wales and northern Scotland with travel disruption possible.

NE Britain has seen a brighter start this morning with increasing cloud away to the SW and over Ireland. Fresh blustery winds are blowing showers into western Scotland, clipping Northern Ireland and low cloud over Wales and England is giving some damp grey weather. The cloud will break up as the brisk west to SW winds continue, allowing sunshine for central and eastern Britain. Lee wave activity could again give some interesting clouds. Rain moves over Northern Ireland and reaches western Wales and Cornwall early afternoon. As the winds back the rain will reach SW Scotland, more of Wales and SW England by teatime. The increasing cloud to the SW is from a warm front and tonight the UK will be in the warm sector with some milder air. Daytime temperatures will be around 10 to 12 and similar overnight for all but northern Scotland with an early dip. The milder air arrives later in the night with strong SW winds through the Irish Sea and for west coast Scotland.